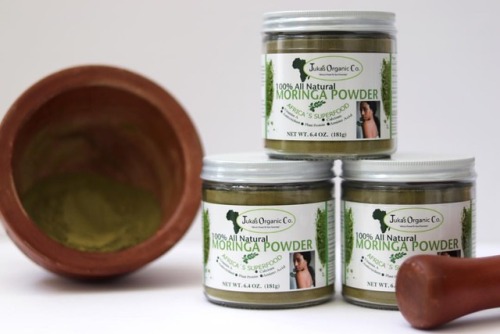 Want to buy or learn the benefits of using Moringa Powder? As a child, I grew up eating moringa leafs as cooked spinach whenever I visited my grandfather’s village. Little did I know it was good for the body. Moringa powder is extracted from the tropical moringa tree, namely the moringa oleifera species. Although it is now harvested in many parts of the world, it is native & indigenous to Africa. Many Ancient Africans used moringa leaves in their daily meals & often cooked this superfood as the southerners cook collard greens in the U.S. It is particularly use in villages that don’t have access or money to buy meat due to it being a high protein plant. Because of its potent nutrients, it has kept villagers that consume it nourish & healthy even with insufficient food. It is now widely used in many parts of the world because of its known health benefits. Some of the many benefits include, high in protein, vitamin B6, vitamin C, iron, vitamin B2, vitamin A, E & K, magnesium, amino acid & fiber. This makes it the superfood of Africa.


24% Fiber A Very Rich Source Of Iron, Vitamin K & E. And A Source Of Vitamin A & Calcium.
Super High Plant Protein including All 9 Essential Amino Acids.


High in Antioxidants Which Helps The Body To Fight Inflammation.


Imported From The Wilderness & Its Native, From Africa, Moringa Is Indigenous To Africa